Based out of an Old Dutch Bungalow, which is 150 year old is the Visakha Museum and is an architectural marvel the city of Visakhapatnam. It was inaugurated in the year 1991 by the then Chief Minister of Andhra Pradesh Mr. N. Janardana Reddy, after the decision was taken that the heritage building should be a medium for exhibiting all the valuable possessions of the Kalingandhra region. The plan to renovate the bungalow and develop the areas round the bungalow was devised during the 80’s by VUDA which paved way to the inception of a Museum as opposed to the previous plan of turning it into a 5 Star Hotel. 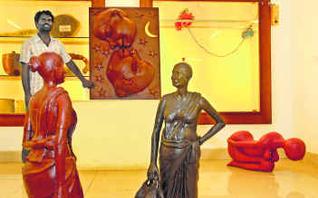 Visakha Museum is a repository of old artifacts, documents and assets relating to the history of people, events and institutions of the largest district of then "Vizagapatam" falling under the "Madras Presidency" from the pre-Independence era, which extended from Tuni in East Godavari district up to Ganjam in neighbouring Orissa depicting Kalingandhra rule. The museum collections include silk costumes, ancient armory, jewelry, crockery, stuffed animals, coins, manuscripts, scrap books, portraits, Shell of an unexploded bomb dropped by the Japanese during World War II, letters, periodicals, diaries, and maps.

Visakha Museum has the following exhibits which will remind you of the yester-years of Indian history:


Artifacts during the time when Mahatma Gandhi had stayed in Visakhapatnam have been placed in the museum including the desk used by Mahatma Gandhi and later by late Sri Tenneti Viswanatham.