Invoke the Buddha in You in Vizag!

Visakhapatnam is also known as Vizag and is a popular destination of tourists from all around the globe. And why not! Can you miss out the lovely beaches, monuments and places of historical importance while in Vizag? The fresh and pleasant feel of breeze in Ramakrishna beach, Tenniti beach park and Yarada beach or the visit to the royal period in history while witnessing artefacts in the War Memorial. Who can miss out on Matsyadarshini aquarium or the Visakahapatnam port!

There are many attractive places to visit in Vizag - the list is endless. Well, you must have visited Ross hill, seen the lofty submarine Kursura and even enjoyed in Kambalakonda sanctuary.

Just when you feel you have travelled the nick and corner of Vizag, you learn that there is much more to explore.

Sankaram is a village near Anakapalli in Visakhapatnam district of Andhra Pradesh. In the vicinity lie two hills Bojjanakonda (towards the East) and Lingalakonda (towards the West). These hills comprise of many rock-cut caves, monolithic stupas, monasteries and stupas --- all depicting the Buddhist saga from 4th to 9th century CE. 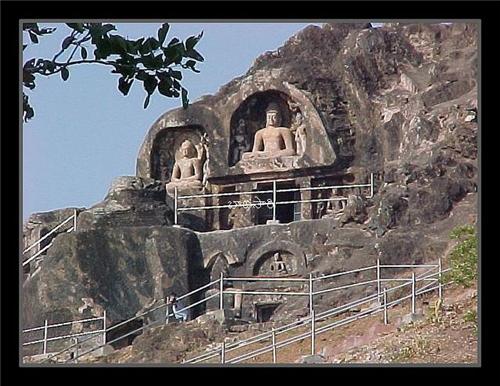 In Bojjanakonda, there are about 6 rock-cut caves with sculpted panels which feature Buddha and his followers. There is a Maha Stupa along with the terraced Chaitya towards its North which makes for Monastery for Buddhist monks. The upper cave is flanked by figures of Buddha on either sides of the doorway.

The figure of Buddha seated in a meditative posture and stupas on the hills are much appreciated by tourists. Lingalakoda is also known as Lingalametta and houses a number of stupas, viharas (monasteries) and monolithic structures.

During excavation in 1907-08 under the aegis of Alexander Rim, pottery, seals, terracotta items like beads and figures, gold coin (Samudragupta period), lead coins, coins of Andhra Satavahanas and copper coins (Chalukya king) etc. were recovered from both these hills. A figure of Kalabhairava with head of Ganesha wearing conch shells and image of Buddhist monk 'Harati' have been found at this Buddhist site.

A fascinating fact about this Buddhist site is that it displays features of all three phases - Hinayana, Mahayana and Vajrayana.

Other learning centres and aramas can be found in some other places too near Vizag such as Thotlakonda, Bavikonda, Pavuallakonda testifying the popularity that Buddhism thousands of years ago. Bojjanakonda was originally known as Buddhuni Konda, that is, hill of the Buddha. 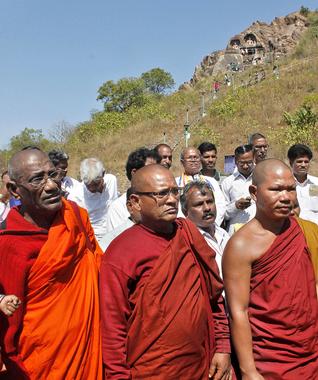 Devotees visit here from far and near in large multitudes during celebration of Vaisakha Pournami. The entire hill reverberates with echos of 'Buddham Saranam Gacchami, Sangham Saranam Gacchami, Dharmam Saranam Gacchami...'' In the month of January, Buddhist monks from Assam, Maharashtra and various regions of Andhra Pradesh visit here to participate in 'Bouddha Mela' which is organized by Visakha Bouddha Sanghala Samakhya just after the Sankranti festival.


Festive Lights Shine along with the Light of Knowledge

The government has made lightening arrangements in both the hills which shine bright making the entire area look heavenly.

INTACH (Indian National Trust for Arts and Cultural Heritage) has taken steps to ensure proper restoration and protection of these Buddhist sites. It has taken up the declaration of Bojjanakonda and other Buddhist sites such as Bavikonda, Thotlakonda and Pavurallakonda as heritage sites by UNESCO.

Your trip up the Bojjanakonda hill and tryst with Buddhist monks will surely invoke the Buddha inside you making you a more peaceful and loving person you could ever be!