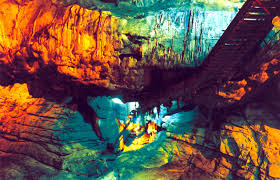 Borra Caves, the millions of year-old caves made of limestone are situated in Ananthagiri Mandal at an approximate distance to 88 kms from Visakhapatnam is one of the most famous tourist spots known for its age old tradition of artifacts & wooden carvings. Located at an altitude of 1,400 meter above the sea level, Borra Caves are renowned for its appealing and attractive stalagmite & stalactite formations.

It has a high religious significance due to its history bearing archaeological importance. It was discovered by William King George of the geological survey of India with some startling discovery of Paleolithic (considered to be from the second part of the Stone Age beginning about 750,00 to 500,000 years BC and lasting until the end of the last ice age about 8,500 years BC) findings to be thought of million years old. Whereas local tales say, tribes living in and around discovered the Caves when through the hole in the caves, a cow fell into the caves.

Legend is that Borra Caves are natural caves which 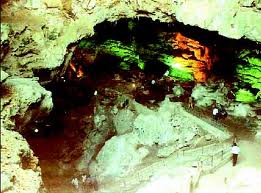 have originated from the Gosthani River flowing  through the caves. The Shiva Lingam representing the Hindu Deity Lord Shiva is found deep in the caves and above the caves looking like a COW hence it’s depicted that bearing a resemblance to the Udder (Sthani) of a cow (Kamdhenu), the river flowing through the caves is called as Gosthani which originates from the Caves flowing through Visakhapatnam & Vizianagaram before joining the Bay of Bengal. The caves with formation of Calcium Deposits are spread over an area of 2 Square Km’s.

With mica mines all over Borra village and the caves, it’s stated that there is a high probability of mining precious stones like rubies. Thalipudi Reservoir at a budget of 4.5 crores across the river Gosthani which is one of the big projects currently going on in Borra Caves.

With well-connected services through rail, road and air via Visakhapatnam, Borra Caves is one of the easiest and most convenient accessible tourist spots. Distance from Vizag city to Borra Caves is 90 Km by road. A hilly road with an approximate time of 3 Hours.

The train services on the lines of Kothavalasa-Kirandul in East Coast operate to Borra Caves and Borra Village with a distance of 100 Km from Visakhapatnam Railway Station journeying through Eastern Ghats with tunnels and takes approximately 5 Hours.

Tourists can get a train from Vizag daily and the frequency is once in a day. You could also take a cab or your own vehicle to Borra Caves however it’s suggested that you leave the driving to the professionals due to the hilly roads. The entry fee for buying the ticket is Rs. 30/- with an additional charge of taking a camera and clicking snaps and taking videos. The timings are from 10:00 am – 5:30 pm IST.

You could take a day’s trip to Borra Caves and cover interesting places like, Damuku View Point, Ananthagiri Coffee Plantations Araku Valley. The ideal time to go to Borra Caves would be during winters primarily November & December. The Borra caves which all through the year have constant weather just like the other parts of Visakhapatnam are considered to be a bit cooler due to the altitude. It’s an enthralling view to see the water streams and experience such old caves as one could only see and not explain the feeling. It’s a must go for all the tourists in India who want to enjoy a Coastal holiday and to make the most of the scenic parts of Visakhapatnam.